Back in late June, I got a call from Dr Yardlie Toussaint-Foster wondering if I would be interested in retouching some images of her grandparents taken during the late 1935-1939 time frame in Haiti.

Of the 4 images that I worked on, this was my favorite!

This took me 4-5 hours, and what you do not see, is the hexagon texture within the paper!

Which posed a little problem, but scanning at a high dpi, 1200 dpi, in this case, really helped.

It’s a classic picture that just seems to say a great deal about the person and the times!

Thank you Dr. Foster for allowing me to work on these images!

What do you think?

I met with my client earlier today, as I delivered one of my latest restoration projects.

This was an image taken on May 4, 1932, of the Second Platoon, 40th District Police station in Philadelphia.

Originally, I was presented with a rolled up image that was approximately 8 x 10 inches wide, and had a 3 inch tear on the left side, which made unrolling the image for viewing, let alone scanning, rather difficult.

Once opened, one could easily see that there were cracks in the emulsion in several areas on the image, and that the left side had also undergone severe fading from the way it was stored.

Looking at it with more detail, and listening to my client, his grandfather is the left most person in the image.

“Think you can fix this picture of my grandfather?”

I said that was going take some time, and gave him a rough estimate, which he accepted and I was on with my challenge!

After finally being able to carefully layout the print onto my scanner, and doing a high-resolution scan, was I able to actually see black scratch marks, that had appeared to have been on the original negative.

What I also found very interesting about this image, from a historical perspective, is that there are at least two black officers and I believe there is a third, and shows how the Philadelphia Police department was ahead of its time when it came to racial diversity.

Thankfully, I was able to listen to several good books while I worked on the image, and after about 15+ hours of work, I was able to meet with him today, to return is original image and he was thrilled with the prints that he had ordered.

Based on watching my client scrutinize the prints I had done, and his reaction during the meeting, and think it is safe to say, I saved grandpa!

So if you have any images that you wish to be restored, please feel free to contact me for free quote.

I was reading through my email this morning, and was happy to find out that Seymour Digital Imaging was voted Thumbtack BEST OF 2015!

Needless to say, I want to Thank First and Foremost, my customers!

It’s YOUR pictures and stories behind the images that really keep me going!

A great unsung History in each image!

I would also like to thank the folks at Thumbtack.com for helping to connect the Customers looking for quality Services!

This was one of those fun restores!

I was contacted by the client via email, and was told NOT to call her because it was a surprise gift for her husband!

and could I scan it while she waited…

The picture could not be out of the house for very long, and they were retired…

Needless to say, we connected, and I was able to produce the following – 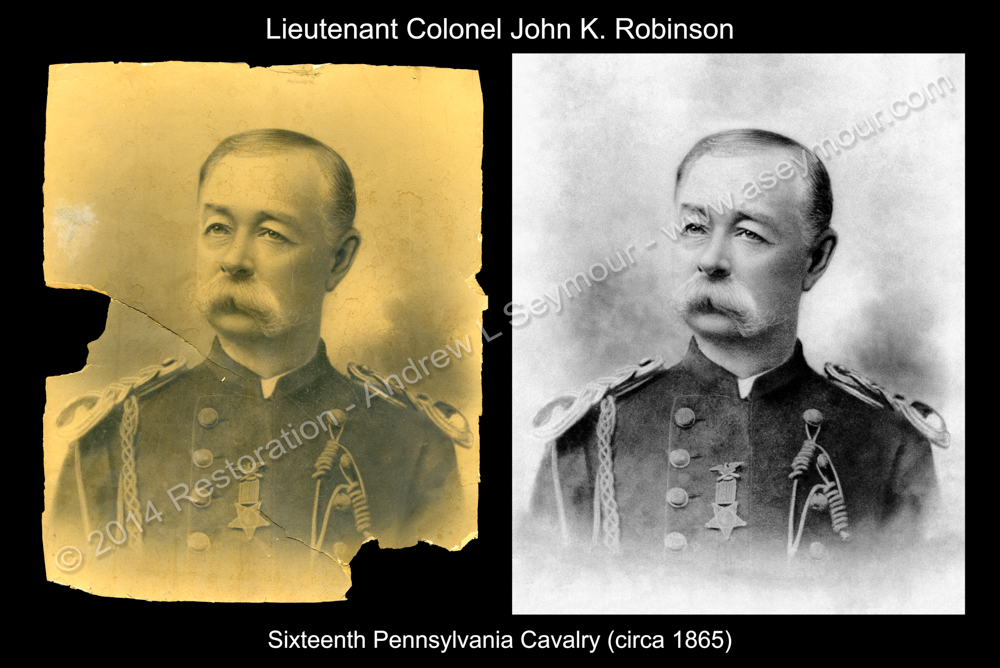 Being the curious person that I am, I was able to find the following reports –

February 5, 1865, the command marched with brigade at 3 a.m. to Dinwiddie Court-House, via Reams’ Station, crossing Hatcher’s Run at Malone’s Bridge; met with very slight resistance; from Court-House the regiment was ordered on reconnaissance on Boydton plank road toward Petersburg. Captain McDowell’s squadron, Companies B and A in advance, went some five miles towards Petersburg; captured 10 or 12 wagons and 1 ambulance (from 46 to 50 mules included); made prisoners of 3 commissioned officers and 10 or 12 enlisted men (D. C. Clark, adjutant of Twenty-fourth North Carolina Infantry included); without firing a shot we returned to the Court-House. The command then marched to near Malone’s Bridge (Hatcher’s Run), and bivouacked at about 11 p.m., the Second Brigade forming rear of column and Sixteenth Pennsylvania Cavalry forming rear of brigade, Captain Oliphant’s squadron, Companies H and G, acting as rear guard, who were followed closely by ten or twelve rebels, who fired occasionally into the rear guard, doing no injury, but capturing two men of G Company.

February 6, 1865, took up line of march at 2 a.m., and by a circuitous route struck the Vaughan road near Gravelly Branch at day-dawn; formed and cooked coffee; 8 a.m. marched with division one mile and a half toward Petersburg, where the whole division bivouacked; 10 a.m. firing commenced, at 2 p.m. our regiment ordered to make a dismounted charge against infantry holding a group of houses; the charge was made with complete success, both men and officers going in with more than usual coolness and bravery, making prisoners of at least 30 rebels. A flag-bearer was shot by one of our men, but the Thirteenth Pennsylvania Cavalry, being mounted, in our rear, charged through our line and gained possession of his flag. Not being sufficiently supported, we were obliged to fall back and take position on right of the original established line; in this charge of our regiment there were 2 men killed and 3 officers and 14 men wounded. A second charge was made, the rebels retreating and finally withdrawing entirely from our front. At dusk we were relieved by infantry and bivouacked.

February 7, 1865, extremely disagreeable; raining and sleeting. Regiment in line, mounted, from morn till night. Nothing to be seen in our front except a few Confederate cavalry pickets. Relieved at dusk and bivouacked.

Needless to say, it is very interesting in exploring the past!

If you need a photo that needs to be Restored, please feel free to contact me.

An old school friend of mine, recently updated his Facebook profile picture, and me being the OCD possessed person that I am, asked if he had the original scan of the image, so that I might be able to clean it up a little.

Unfortunately, the file was not available, and I was left with just a jpeg file that he had posted.

So, what do you think of our young man now?

If you have images that you need to be touched-up or restored, please contact me for a free estimate!